What a way to spend your fifth anniversary… 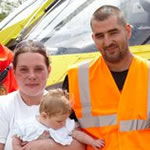 On the 8th August 2009 Michael Garth (Mickey), a local farmer, and his girlfriend Amy Lynch had a day of bailing planned. At around midday, Mickey had to re-thread the twine mechanism on the big bailer, as he did this, a clump of twine wrapped around his wrist and dragged his right arm into the machine.

In one terrifying instant, it cut through the skin, bone, arteries, and tendons at his arm pit.

Amy realised that for Mickey to live, let alone have a chance of saving his arm, she would have to release his arm from the machine and stem the blood flow. She carefully and swiftly got Mickey out of the machine and onto the floor and put him into the recovery position, raised his legs and applied direct pressure to the wound site.

A few minutes later the paramedics arrived. Mickey’s blood pressure was so low that it was barely detectable. Mickey needed the speed of the YAA helicopter to get him to Leeds General Infirmary otherwise he would have died. In just over 3 minutes they had landed on the roof top helipad (it took nearly 40 minutes for Amy to get there in a police car!).

Ten hours after the accident, Amy got to see Mickey again; he was okay, albeit shaken, but most importantly, he was alive, which can be thought of as a miracle considering the surgeons had predicted he had lost over 80% of the blood in his body. The surgeons did everything to save his arm, and the first operation went very well. However, the day after his birthday a raging infection set in and an artery burst. He was rushed to emergency surgery where, sadly, Mickey lost his arm above the elbow.

On the 21st of August, Mickey was discharged from hospital, he has continued to do well both physically and mentally. Everyone around him has been so shocked by how quickly he has healed and how matter of fact he has been about it. Mickey has just received his first prosthetic arm and is learning how to use it. Soon he may be able to return to full-time farm work again.

Mickey and Amy discovered that the service provided by the YAA is second to none and many patients would have not survived if it wasn’t for them. The YAA relies solely on donations. It receives no NHS or Government funding and incurs a cost of £7200 per day to keep both helicopters in the air and saving lives.

So please help us keep the flow of money coming into the YAA. You never when their services might be needed by someone you know too. Thank you.

It was supposed to be the happiest year of our lives… 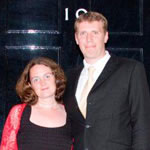 On the 6th April 2009, just 23 weeks into their pregnancy and without warning, Steve Allinson’s wife Julie went into pre-term labour with twins. She held on for 58 hours, of what one can only assume must have been a more fraught and torturous experience than can possibly be imagined, before finally giving birth.

Their first of two sons, George, was born on the 9th April at 07:00hrs on the dot and weighed just 656g. Unfortunately for them, further complications arose and Michael, his twin brother, was born an hour later, but unfortunately wasn’t strong enough to survive the ordeal.

After another two days of constant worry and heartache, not only for his remaining son but also for his wife who was not well after the birth and subsequent infection, Steven had to watch on helplessly as George succumbed to the trauma of the birth and fell ill himself. After two more days of watching his situation slowly deteriorate and with no options left to them, Steven and Julie had to take the most soul destroying decision that can ever be put to a parent, and on the 13th April they finally had to say goodbye to him too.

Just nine months later, with his best mate in tow and after a lifetime of smoking and drinking more than he should Steven ran the London Marathon, raising nearly £7,000 in addition to the work he undertook with Rawdon Fun Day for the wonderful charity that is Tommy’s.

We can only continue to raise funds for YAA and local causes with the help of our volunteers and sponsors.

Our sponsors are very important to us. If you would like to become a sponsor please click here.

For our huge team of volunteers, RFD means making a real difference. To contribute just an hour or two, click here. We'll even say thanks with some refreshments and food on the day.